Whether in literature, film, children’s stories, or other popular media, the figure of a witch is typically represented as female. One of the chief reasons for this is due to the real-world accusations of witchcraft that occurred across the early modern period in Europe and America, where more women were accused of witchcraft than men. However, in many cases, those accusing women of witchcraft were other women.

One of the most famous witchcraft cases occurred in Salem, Massachusetts in 1692. In this witchcraft episode, a group of young women aged between nine and twenty accused hundreds of people of witchcraft. They were not the only accusers to take part in the Salem witch-trials, but they were an integral part of many accusations and they accused more people than anybody else. 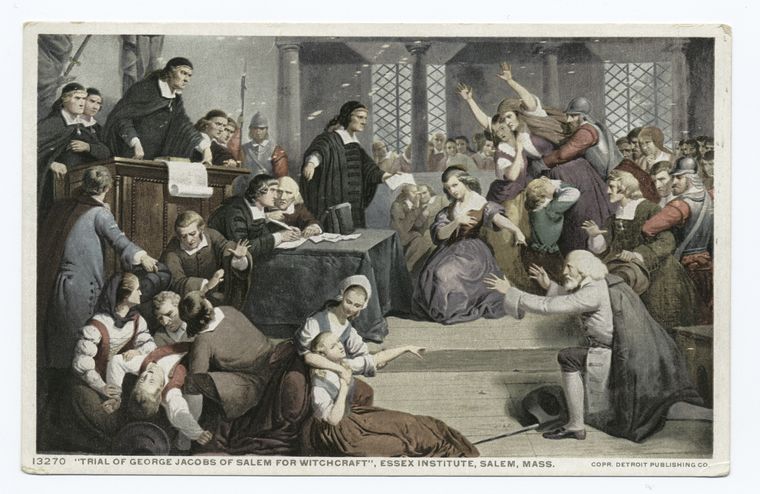 The historical documents show that these young women took an active role in the trials by exhibiting strange physical behaviour such as fits, bodily contortions, unexplained pain, going into trances, being struck mute and claiming to see the witch’s ‘familiar’ (a supernatural animal believed to be working together with the witch). They also participated in the process of accusation by claiming to have seen apparitions of the witches who often harmed them by pinching or choking them, and urged them to sign the Devil’s book.

In Arthur Miller’s play The Crucible (1953), these young women are portrayed as scheming and deviant, their actions deliberate and manipulative. Some historians have also interpreted their actions that way. During the trials, the girls were found with pins stuck in their bodies, which they blamed on the accused witch. Bernard Rosenthal has pointed to instances like this to argue that their behaviour was deliberately fraudulent and that the girls were faking their symptoms. Peter Hoffer came to a similar conclusion in his work, arguing that when teenage girls joined the group of accusers, deliberate fraud must have been involved.

Others have suggested that they may have had some kind of mental or physical illness that caused them to react in this way. One of the most long-lasting theories has been that the girls were suffering from ergot poisoning, as was argued by Linnda R. Caporael in 1976. Ergot poisoning occurs when someone eats grain products, such as bread, which has been contaminated with fungus. Its symptoms include spasms, convulsions and muscle pain. While the theory of ergot poisoning has been largely debunked, historians have still hypothesised that these young female accusers were suffering from some kind of mental or physical illness. Emmerson Baker has suggested they may have been suffering from mass conversion disorder which affects the nerves in the body, causing it to contort and twitch. He linked this to other outbreaks of mass conversion disorder such as an occurrence in New York in 2012, where a groups of girls from Le Roy high school were affected.

However, there is a long history of young women not only accusing others of witchcraft, but also behaving in a very similar way when they did so. In my article for Cultural and Social History, I compare the behaviour and actions of the young female Salem accusers with those from other English witchcraft trials involving young women. I particularly explore the emotions displayed by these young women, as emotions can be very revealing aspects of society and culture. We have very few sources from young women and their experiences across the early modern period, and their agency is often diminished. Because of this, I also wanted to draw attention to the agency of these young female accusers and the role they played during these events.

Apart from exhibiting similar physical symptoms, young female accusers also demonstrated similar emotions and emotional reactions. Accusers were often angry at the witch because they believed she was causing them physical pain. In an English witchcraft case that took place in Lowestoft in 1662, 11-year-old accuser Elizabeth Pacy fiercely attacked the accused witch Amy Duny in court. They also expressed terror and fear in court and through their depositions, often after seeing apparitions of the witch. However, if the witch confessed to his or her crimes, they were compassionate and forgiving – in the Salem trials, when Mary Lacey Jr. confessed to witchcraft, her accuser, Mary Warren, publicly embraced her and cried with her. These emotions were scrutinized in court and are part of what made the accusers so believable.

I also read the accusations as ‘narratives’ – observing the story these young women were telling about the accused and (inevitably) about themselves. These narratives also contained similar themes of temptation, in which young women passionately recounted their resistance to it. Puritans believed that the Devil could tempt people into witchcraft, and young women often expressed how they overcame these temptations in pious ways.

If young women across different regions and time periods were behaving so similarly, as well as conveying similar narratives revolving around similar fears, hopes and desires, is it really credible to think they were all mentally unwell or deliberately faking their symptoms? I think it is far more likely that this behaviour shows us a gendered reaction to witchcraft caused by a Puritan belief system in which people really did believe that witches and the Devil were capable of infiltrating ordinary people’s lives. Although the Western world may view these beliefs as ludicrous now, these were sincere beliefs in the early modern period. This didn’t mean that accusations of witchcraft were always believed – that’s why they had trials. But it does suggest that these young women were very convincing to those in charge of the proceedings.

As I was studying the similarities between the Salem accusers and other young female accusers, I noticed a particularly unusual aspect of the Salem accusations. Along with witchcraft, at least 17 people were also accused of murder by these young women. In their accusations, they claimed to see the visions of relatives (usually former spouses or children) that had been murdered by the accused witches. These visions often appeared to them in “winding sheets” and cried out for revenge for what had been done to them. Some of these deaths had occurred before the young accusers had even been born, and it is likely that they were the result of gossip in the community.

This reoccurring theme seemed too large to ignore. Not only were the accusers accusing people of consorting with the Devil, but they were also accusing them of non-supernatural violence. In a way, this accusation may have seemed out of place in a witchcraft trial but it brought social context into their accusations. It also tells us a lot about what these young women perceived as a ‘bad’ person, the violence they feared, the deceit they felt, and the justice they wanted to see.

Taking young female accusers seriously is not letting them “off the hook” for their actions. Their actions caused the death of many innocent victims and it is likely that, at some point, some of them must have realised this. The reason that the Salem girls are treated differently to other young female accusers is probably because they accused so many people over a long period of time. However, to treat them all as either ‘mad’ or ‘bad’ is to ignore a long history of similar behavioural characteristics and emotional responses among young female accusers. Behaviour such as fits, unexplained pain and bodily contortions are present across witch-trials involving young female accusers in sixteenth and seventeenth-century England and New England. Aside from these physical characteristics, there are also similarities in emotional responses and reactions to these events, particularly anger, fear and compassion, which reveal similar concerns about young women’s future and their fears in the present. I believe these similarities are important to acknowledge, because they are evidence of something beyond mere coincidence which cannot be categorised as either a physical or psychological imbalance, or deliberate deception. By taking young female accusers seriously, we can more aptly acknowledge the agency that young women exhibited in witch-trials, while also acknowledging that witchcraft accusation often arose as a consequence of a religious belief system which compelled a sincere belief in the supernatural.

About the Author: Isabelle Laskaris recently completed a Master of Arts degree at the University of New England in New South Wales, Australia, where she primarily researched emotions in New England witchcraft. She is currently completing an Honours thesis on slave resistance in eighteenth-century New England at Monash University, and also works as a Liaison Librarian at Deakin University. She is the author of ‘Agency and emotion of young female accusers in the Salem witchcraft trials’, Cultural & Social History, published online 4 March 2019.