Researching the home as a site of intellectual activity by people little known to the Dictionary of National Biography has led me from literary letter-writers to home brewers and from cultivated parlour conversation to the techniques of the stillroom. Increasingly, I have come to realise that it was in the unspoken, tacit knowledge of home that unassuming but important intellectual work was done. But, in locating the lives of the domestic experimenters of eighteenth-century British society, I was surprised to find the silkworm sitting at the heart of a compelling story of ingenuity and industry that spanned the globe, was championed by national institutions and whose unlikely protagonists included a postmistress from Kent. 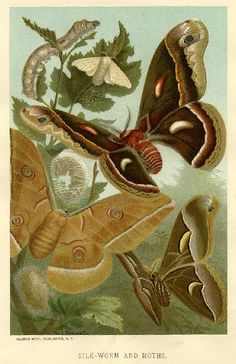 In my article for Cultural and Social History, it is the story of Ann Williams, a Gravesend postmistress – alongside several other English and Irish women – that reveals the way the environment of home shaped experimental activity in this period. Williams exhibited an intense dedication to the cultivation of silkworms, a zeal for observing nature and an eye to the commercial opportunities of silk production. She reported on her ‘little family’ of silkworms to the Society for the Encouragement of Arts, Manufactures and Commerce in London so that her insights might contribute to national prosperity by helping to establish raw silk production in Britain. Women across these islands, from County Cork to Shropshire, wrote to the Societies of Dublin and London to mark out their contribution to the public good and, ideally, to earn a cash prize. Ann Williams was awarded twenty guineas for her efforts. Residents of North American colonies also sought to establish mulberry bush plantations (the preferred food of silkworms) to support this profitable industry. Reports about the precise manner of silkworm cultivation common in other parts of the world were circulated and printed in these Societies’ records. These channels of knowledge exchange laid the groundwork for individuals like Williams to try their hand from the comfort of their own home.

Ann Williams herself was not a newbie, she had written to the Society before about the potential use of the common woodland plant, cuckoo pint, in dyeing – suggesting a pattern of investigative activity in her life. But, it was silkworms that really caught her imagination and became the subject of a series of lengthy letters to the London Society. Williams reckoned that her odd investigations might have had her ‘burned for a Witch’ had she ‘lived in the times of superstition’ but during her own enlightened epoch she was able to declare:

the immortal honour which your Society have bestowed on me, calls forth every grateful sentiment of my heart … nothing shall be wanting in me to fling a light on what may be of service to thousands after death has drawn a veil over my face, and covered me with the dark mantle of the grave. Exulting thought! that my poor endeavours may one day prove beneficial to my Country.

However, taken as a whole, Ann Williams’ letters betray a more fundamental motivation for her work – curiosity. Williams, and other men and women across Britain and Ireland, developed their techniques, observed their results and could report – with the full authority of personal experience – to the men of business, industry and learning who presided over the London and Dublin Societies. For historians, trying to trace their imprint in the records, it is the interesting relationships between these people, their domestic spaces and apparatus that emerge most clearly from the page. By examining these relationships, women who have remained entirely obscure to our histories of intellectual life can be found ‘flinging light’ of their own on the mysteries of nature and doing so for the benefit of their Nation.

About the Author: Dr Leonie Hannan is Lecturer in Eighteenth-Century History at Queen’s University, Belfast and she is a social and cultural historian working on themes of gender, material culture and intellectual life. She is the author of Women of Letters: Gender, Writing and the Life of the Mind in Early Modern England (Manchester University Press, 2016) and the co-author of History Through Material Culture (Manchester University Press, 2017). Her most recent article is ‘Experience and Experiment: The Domestic Cultivation of Silkworms in Eighteenth-Century Britain and Ireland’, Cultural and Social History, vol. 15, no. 4 (2018), pp. 509-530.