On 31 March 1711, at the spring session of Carrickfergus Assize Court in Co. Antrim, Ireland, eight women were convicted of demonically possessing a young woman, Mary Dunbar, using witchcraft. This was an offence under the Irish 1586 Witchcraft Act for which they were jailed for a year and made to stand four times in the stocks on market day. The women would become known as the ‘Islandmagee Witches’ due to their association with Islandmagee, an eight-mile long peninsula on the east coast of Co. Antrim in what is now Northern Ireland.

My article, ‘Witchcraft Belief, Representation and Memory in Modern Ireland’ was published online in Cultural and Social History on the 308th anniversary of the trial. It explored how the ‘Islandmagee Witches’ were remembered, and in the case of the ninth Islandmagee witch, William Sellor, husband and father to convicted women, Janet and Elizabeth Sellor, forgotten. Using newly discovered evidence, I revealed that Mary Dunbar died three weeks after the first trial, in April 1711. William Sellor was found guilty of Dunbar’s murder by witchcraft at the following session of the Carrickfergus Assizes, in summer 1711. He was thus the only male witch in Ireland to have been executed.

In February 2015, having recently published my Possessed by the Devil monograph detailing the 1711 trial, I was finishing a more general study of early modern and modern Witchcraft and Magic in Ireland, when the story of the ‘Islandmagee Witches’ hit the headlines. The Guardian newspaper reported that a ‘hardline Traditional Unionist Voice (TUV)’ councillor in Co. Antrim had ‘objected to a memorial’ for the eight women because he believed it would become a ‘shrine to paganism’ and because he ‘remained to be convinced the women were not guilty of devil worship’. On the same day, the BBC website published an editorial on the issue, to which I contributed. I stated in the piece that I thought the women should be commemorated and pointed out that they had not been convicted of devil worship but of the crime of harming by magical means. With hindsight, I should have pointed out there were in fact nine ‘Islandmagee Witches’, and said something about the difference between paganism, early modern witchcraft, and Satanism.

The debate rumbled on online and it was suggested in some quarters that the story of the ‘Islandmagee Witches’ had been deliberately suppressed over the centuries by the media, the Church and state. Indeed, compared to the mass trials of the ‘Pendle Witches’ in Lancashire in England in 1612 and the ‘Salem Witches’ in North America in 1692 they had indeed been forgotten: there was no tourist industry built around them and little by the way of commemoration. My 2013 book focused on the 1711 trial itself but it was obvious while doing the research that the case was continually talked about in Islandmagee itself as well as in creative writing and public discourse. It was at that point I committed to writing (at sometime in the future) the article just published in Cultural and Social History.

When planning the article I decided to focus on continuing belief and representations of historic trials in modern Ireland, building on pioneering work on Britain and America by Owen Davies, Marion Gibson, and Ronald Hutton, among others. I first of all explored how the 1711 trial was remembered in modern Islandmagee using folklore, objects of material culture, newspapers, letters, memoirs, and local histories. I suggested that in the nineteenth and twentieth century witchcraft beliefs in Islandmagee, like elsewhere in Britain, Ireland and America, continued at a popular level. In Islandmagee, however, continuing witchcraft belief was also shaped by the collective or social memory of the Islandmagee trial transmitted via oral tradition and sites associated with the case. These sites included Knowehead House, where the possession occurred, and an old ‘rocking stone’ on which the ‘Islandmagee Witches’ were thought to dance at night. It was also believed that one of the convicted women, Catherine McCalmond, left claw marks on the rock as she was dragged off to court. Due to the dangerous, lingering supernatural presence of the ‘Islandmagee Witches’ both sites were studiously avoided by local people at night in the nineteenth and early twentieth centuries.

I also used the narrative of the ‘Islandmagee Witches’ to examine how witchcraft belief and historic trials were used in Irish creative writing and public discourse in this period: in novels, plays and poetry, antiquarian and historical writing, journalism, and travel writing. During the writing and re-drafting process, due to space restrictions, I removed the section on creative writing to concentrate on journalism and historical and travel writing. This discourse demonstrated that the story of the ‘Islandmagee Witches’ was used to create an accepted narrative of Irish witchcraft, which at once questioned its reality while distancing Ireland from the legacy of early modern-European witch-hunting. The Islandmagee case itself was explained away in enlightenment terms as an exceptional case: a rare Irish lapse into the irrationality, ignorance and religious zealotry that drove witch-hunts elsewhere in Europe. What was surprising, in terms of the nineteenth-century Irish newspaper coverage, was the lack of overt politicization in a press increasingly polarized across unionist and nationalist lines. It was only in the early twentieth century that the 1711 trial was seen as the product of British colonialization, imperialism, and immigration. By the mid twentieth century, some journalists however had medicalised the case, suggesting that Mary Dunbar’s accusation was the product of mental illness.

All modern coverage had one thing in common: the exclusion of William Sellor from their narrative, either by accident or design. Furthermore, a myth created in the 1820s by local historian of Carrickfergus, Samuel McSkimmin, that one of the witches lost an eye while being pelted with cabbage stalks in the pillory, proved irresistible to many commentators. The poet W.B. Yeats for example reproduced McSkimmin’s 1823 account almost verbatim, including the lost-eye myth, in his folklore anthology, Fairy and Folk Tales of the Irish Peasantry (1888).

I finally argued that along with controversy created over twenty-first century commemoration of the 1711 trial, this discourse highlighted a longstanding avoidance of the issue of Ireland’s witch-hunting past. I do hope to see all nine ‘Islandmagee Witches’ properly commemorated in the future and their story told more widely. For historians, the trial is a good example of witchcraft accusation arising in a contested, gendered, diaspora community, and for everyone it is a salutary tale of the need for tolerance, humanity, and acceptance. 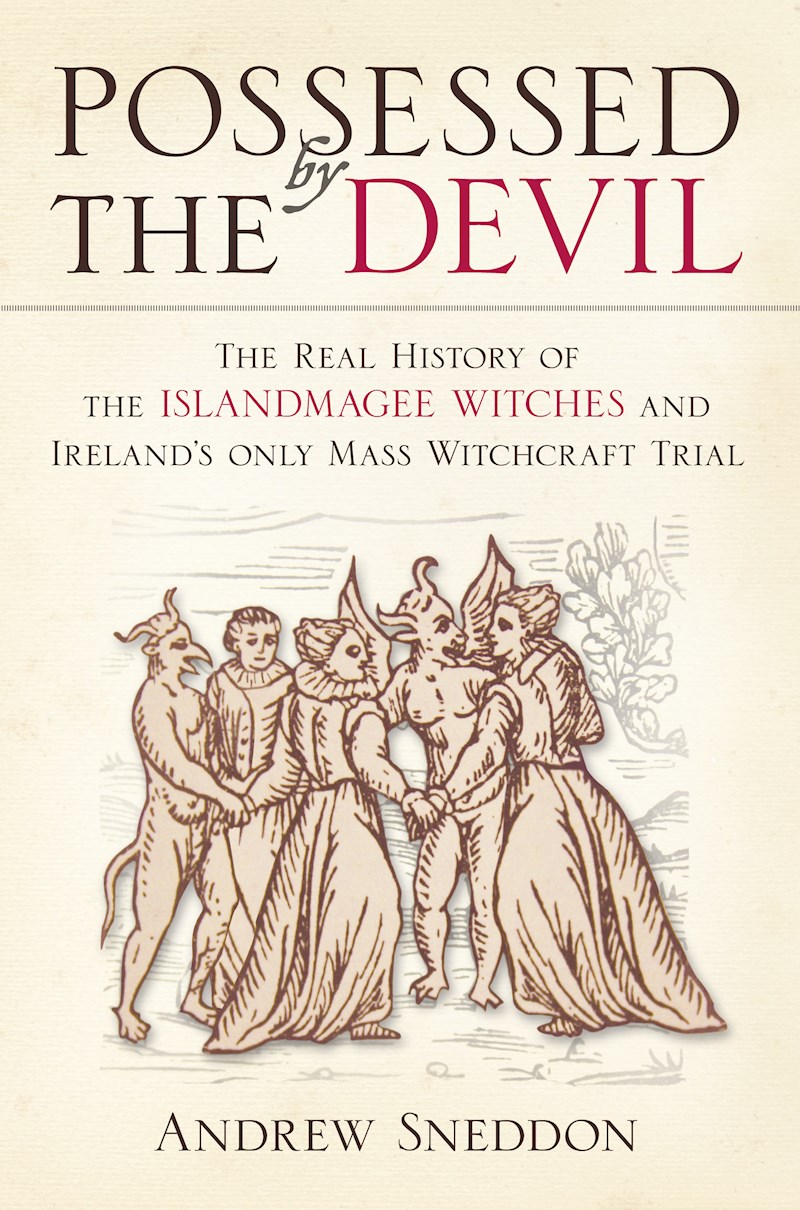 About the Author: Dr Andrew Sneddon is Lecturer in International History at Ulster University. He is a social and cultural historian of witchcraft and magic from the medieval to modern periods. He is the author of Witchcraft and Whigs The life of Bishop Francis Hutchinson, 1660–1739 (Manchester University Press, 2008), Possessed by the Devil: The Real History of the Islandmagee Witches and Ireland’s Only Mass Witchcraft Trial (History Press, 2013) and Witchcraft and Magic in Ireland (Plagrave Macmillan, 2015). His latest article is ‘Witchcraft Belief, Representation and Memory in Modern Ireland’, Cultural & Social History, published online on 31 March 2019.