In British cities of the mid-nineteenth century, hundreds of poor children gathered in crude and makeshift classrooms for a rudimentary free education. So-called ‘ragged schools’ were established in response to the (seemingly associated) problems of delinquency and poverty that were deemed a plague on Victorian society by social commentators. While the ragged schools are frequently cited in histories of childhood, education or religion, they have not been the subject of a concentrated study. This is what I have sought to offer in my new book, Religion and Relationships in Ragged Schools: An Intimate History of Educating the Poor, 1844-1870. 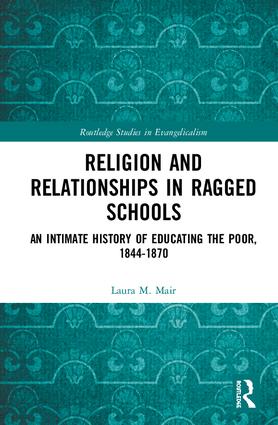 Focusing on ragged schools in England and Scotland, this book charts the major contours of the movement. From the commencement of my research, I hoped to add an intimate dimension to my narrative – to go some way to access the relationships formed and the day-to-day exchanges that occurred within the ragged school classroom. This was made possible by the rich and unused archive of Compton Place (or Brunswick Square) Ragged School. Situated in St Pancras, a short walk from Thomas Coram’s Foundling Hospital – that symbol of eighteenth-century philanthropy – Compton Place was distinctly average by ragged school standards. It was plagued by the problems common to these institutions: a lack of money, an inability to retain volunteers, challenging behaviour, and inconsistent attendance. She is set apart, however, by her unparalleled archival legacy.

In February 1989 a Dr Martin Ware deposited his ancestors’ trove of diaries, memoirs, and wills, spanning from 1621 to 1962, in Woking’s Surrey History Centre. Among this material are the seven school journals of Martin Ware III (1818-1895), a barrister and volunteer ragged school teacher, produced during his time at Compton Place. The journals cover seventeen years, from 1850 to 1867, and detail Ware’s conversations with scholars and parents, his worries regarding volunteers, and his frustrations with bad behaviour or irregular attendance. The Compton Place collection is especially remarkable because of the existence of sources which grant access to the children who attended the school. The children are not only accessible through Ware’s journals, but are found in the collection of 227 letters from 57 former scholars. Sent by emigrants in Australia, Canada, and New Zealand, or from posts in the army or navy, these letters permit unique access to the children’s testimonies, articulated in their own words.

The decision to use a microhistory approach was not taken lightly, particularly as my original intention had been a broad history of the ragged school movement and its impact on poor children. Yet, the Compton Place material has facilitated more than a dry history of an institution; rather, it has enabled a history of the lives it shaped, both those of children and of adults. While being a close history of one particular school and the relationships formed there, this book is simultaneously a history of child poverty, of changing ideas about children’s educational rights, of philanthropic action and the cross-class relationships formed, of religious education and children’s responses to it, as well as the experiences of working-class British emigrants in the mid- and late nineteenth century. These broader topics are refracted through the exchanges between Ware and his scholars, both the humdrum and the exceptional.

As a researcher, I have been immersed within the school community that Ware’s journals invite their reader into. This has inevitably entailed grappling with the challenges of studying real people and real lives; the poverty and anguish so often related by Ware is tangible and nearby. During the transcription process I felt a keen sympathy for those who, like Ware, witnessed such suffering, as well as for those who lived through it. Moreover, in engaging with Ware’s script I quickly came to recognise his dark humour, his expressive punctuation, and the discrete, marginal markers of his own feelings. The sense of responsibility when transcribing both Ware’s journals and the letters of former scholars was unshakeable and I came to regard myself as a custodian of the Compton Place children as well as of their teacher.

‘Here ends this Season. I am to be married this Tuesday’.  Penned on 21 July 1867, this melancholy farewell is found on the final pages of Ware’s journal. The closing three words, written in smudged Koine Greek, read ‘Glory to God’.  But, this was not the end. The following Tuesday, after Ware and his new wife exchanged their wedding vows, children from Compton Place showered the happy couple with posies.  Three years later, in October 1870, the same year that the Education Act was passed in England and Wales, young Charles Henley put pen to paper in a letter to his former teacher.

Six years earlier, on 29 May 1864, Ware noted after visiting Henley that he ‘strikes me as being remarkably intelligent and thoughtful – fond of reading & makes original remarks’. In August the same year Ware recorded that he had ‘found Henley in the streets and took him to the Ind School’. After Henley was discovered ‘making off’ with a teacher’s watch, Ware remarked that ‘He is a very clever boy & will either turn out a very good or a very bad man’. Henley’s only preserved letter to Ware, sent three years after his teacher left his post at Compton Place, is indicative of the enduring nature of ragged school relationships:

Having learnt your address and your assurance [‘of goodwill’ later inserted here] from Mr Owen I hasten to have this opportunity of addressing you. Perhaps you might think I am ungratefull. (But although my actions belie my sentiments) this is far from the case I have often thought of you but I could not muster sufficient courage to write. I have been enlisted twelve months yesterday the 2nd of October.

My object in writing is to thank you for all the kindness you have shown me.

When I left the Shoeblack Brigade I wandered about penniless & hungary. You met me at the bottom of Grays Inn Rd & took me to the St. Pancras Industrial School. Since then you have been my best Friend and I shall never be able to repay your goodness. I must conclude trusting you are quite well I Remain Dear Sir

Please write if only two lines. I will have more time to tell a little of my life as a Soldier in my next.

Henley’s next letter, if ever it existed, was never preserved. His final line is a fitting cliff-hanger that potently represents his continuing relationship with Ware, if only in his memory.

The sense of incompleteness here is suggestive of the fragmentary nature of this history. Just as 51 Russell Square, the building in which Ware kept and up kept his journals, no longer exists, we are left to piece together what remains of an incomplete and lost history. Yet, Ware’s journals and the letters he received thankfully outlived his home. We are fortunate to have learned so much of Henley’s story; there are many others who never wrote or who harked from schools for which there are no surviving records and whose words are consequently unattainable. The intimate and changing relationships formed in Compton Place have proven the most complex and intangible components of this book; however, it is this part of the institution’s story that has been the most revelatory and rewarding.

Religion and Relationships in Ragged Schools: An Intimate History of
Educating the Poor, 1844-1870 is available from Routledge

About the Author: Dr Laura Mair is REF Impact Officer for the School of Divinity at the University of Edinburgh. Alongside completing her doctoral research on the ragged school movement, in 2015-16 she acted as research consultant to the Victoria and Albert Museum’s Museum of Childhood for their ‘On Their Own’ exhibition on British child migrants. She is the author of Religion and Relationships in Ragged Schools: An Intimate History of Educating the Poor, 1844-1870 (Routledge, 2019).

One response to “Researching the Ragged Schools”